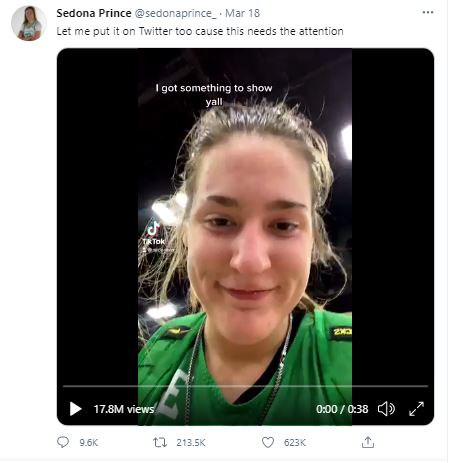 The National Collegiate Athletic Association (NCAA) has been facing backlash recently for what appears to be a disparity in funding and facilities between the men’s basketball tournament, known as March Madness, versus the women’s.

Teams participating in these tournaments were kept in a “bubble” in order to hold the tournament, and limit the spread of coronavirus. The men’s tournament was held in Indianapolis this year, while the women’s was being held in San Antonio.

As more and more athletes have been connecting with their fan bases through social media, viewers were able to get an even closer look into the world of sports – and this controversy was no exception. It all started when members of the Oregon women’s basketball team started posting TikToks reviewing the food they were receiving at their tournament. This then spiraled into exposing the disparities within every aspect of  the tournaments, from training facilities, to coronavirus testing.

One of the main discrepancies noted was the extreme differences in training facilities for the men’s bubble versus the women’s. When photos were shared of each weight room in March, a firestorm began. The women’s “facility” featured a stack of dumbbells, an exercise bike, and some yoga mats. The men’s facility featured a training room with an array of benches, weight racks, and other equipment. The men’s appeared to be a state of the art facility. After the social media firestorm began, the NCAA initially alleged it was a space issue. However, Oregon basketball player Sedona Prince quickly responded in a video, showing space in the convention center that seemed to be unused, stating “If you don’t care about this, you’re a part of the problem.” The NCAA quickly backpedalled on their statement, apologized to the women and players, and converted space in the convention center into a better training facility, providing the teams with more equipment.

“We fell short this year in what we have been doing to prepare in the last 60 days for 64 teams to be in San Antonio. We acknowledge that,” said Lynn Holzman, who is the current senior vice president of women’s basketball for the NCAA, in a conference call with coaches and team administrators.

However, even more discrepancies were revealed over the course of the tournament. One of the major ones being the different COVID-19 tests that players were given each day. The men were receiving PCR tests each day to determine if the players were testing negative, therefore still being eligible to compete. The women were given rapid antigen tests each day. PCR testing is considered, as many put it, the “gold standard” of COVID-19 testing; rapid antigen testing is not as accurate, and more prone to give false results. The NCAA president, Mark Emmert, followed up on the differences in testing, stating, “We have complete confidence in all the medical protocols that have been put together. All of the health experts say the protocol that they’re using right now in all our venues and all our championships is one that has no difference at all in our ability to mitigate risk.”

Overall, the differences displayed by the NCAA has caused a debate in the world of sports. Many have argued that the differences within the tournaments stems from a lack of revenue produced by the NCAA Women’s March Madness tournament, and women’s college basketball in general. However, that argument is simply false, because although the NCAA brought in $1.18 billion in 2019, they are still considered a nonprofit organization. This means that the revenue each sport brings in should not play a part in funding. The world of sports is ever changing, and these recent events have definitely brought important questions, and debates to light.