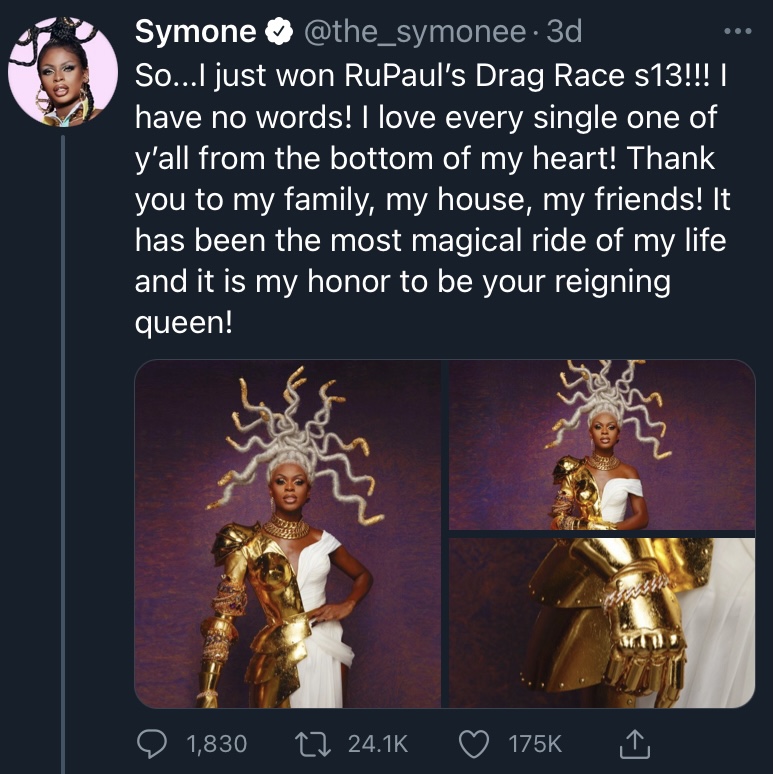 “The winner of Rupaul’s Drag Race, and America’s Next Drag Superstar, is…”

These words echoed at every finale since the first season of the show, and were the final statement that wraps up a season of the beloved franchise. This year it was one of the most anticipated finale’s of the franchise because of its very long run since January 1. Then, on April 23 as those words left Rupaul’s mouth, the next winner was declared.

“Symone.” America’s Next Drag Superstar was declared and fans went wild. Social media was ablaze that night as the “ebony enchantress” celebrated her win. Symone slayed the runway all season long and left fans dying in the comedy challenges. Even with her few fumbles in the singing and dancing challenges, she always managed to rise to the top. Reggie Gavin, also known as Symone, was originally from Conway, Arkansas but moved to LA a few years ago with his chosen family. The House Of Avalon was born and the pure talent that arose from it was amazing. Symone and her drag sister, GiGi Goode, both have been on the show and both made it to the finale.

All season, Symone brought Black Excellence to the runway and to her challenges, she wore one of the most impactful looks in the entire show’s history with her “fascinator” themed runway look. It was an all white form fitting gown with three bullet holes in the back to represent the victims of racial injustice. Not only that but her “trains for days” themed look was a durag that was insanely long with a gorgeous blue jumpsuit. Two of the best looks in drag race herstory that both represented black culture and a powerful message.

Very rarely do we see a Rupaul’s Drag Race winner with such a large fan support. Since day one, Symone caught the eye of every fan with her stunning face and charming personality; she practically had winner written all over her. The fandom has proven to be toxic at times with many queens experiencing racism and blatant bullying, queens have even quit social media or gone off the grid fully because of the extreme negative feedback. This season a few queens did receive backlash, but like a queen does they all shrugged it off and focused on the love. Symone was one of those queens; she never let the hate get to her head and is probably one of the most liked winners in the past few years.

Now as the fandom prepares for the ebony enchantresses reign as queen supreme. They can rev their engines for even more drag race, the show has no intentions of pumping its breaks anytime soon, with “All Stars 6” right around the corner, Season 14 in production, and Rupaul’s Drag Race Down Under premiering on May 1, drag is truly taking over the world. Season 13 won hearts and touched viewers across America, even with its long airing it still managed to keep fans hooked and left them missing it after its conclusion. As always the winning queen gets one thing to say during her crowning and Symone has one last thing to say: “Don’t let the smooth taste fool you baby.”