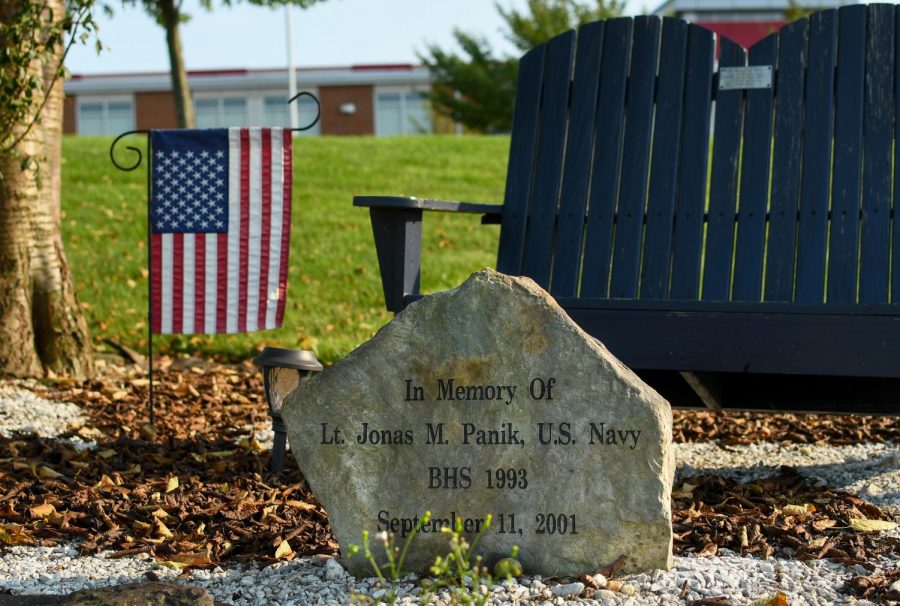 A memorial rock sits in front of the school to honor Lt. Jonas M. Panik.

On September 11, 2001, an American tragedy occured; one which has impacted an entire country and changed the course of history within it.

On the morning of September 11, four planes were hijacked and, in a coordinated attack, flown towards high profile targets and places of significance in the United States. Two of these planes, Flights 11 and 175, were flown into the Twin Towers that made up the World Trade Center in New York City. Another, Flight 77, crashed into the Pentagon, the headquarters building of the US Department of Defense, and an important military building, based in Arlington, Virginia. The final hijacked plane, Flight 93, crashed in a field in Shanksville, Somerset County, PA. It is believed that this attack was bound for the nation’s Capitol Building or the Whitehouse, and that the passengers on the flight learned of this and resisted the hijackers, ultimately causing the plane to crash.

A total of 2,977 people were killed in these attacks. Of those, 2,606 were at the World Trade Center and the surrounding area, 246 were in the four planes, including every member of Flight 93, and 125 were at the Pentagon, according to iNews.

The 9/11 attacks have changed the course of history within the United States. Nearly 3,000 individuals were killed, and an entire country was impacted. The United States mourned lost civilians, workers, first responders, armed forces; siblings, parents, friends, and partners. This tragedy united the country in grief and, eventually, anger, and also tore it apart to some extent due to newfound racial tensions. It influenced the United States’ controversial entry into a war that has evolved and continued for two decades. One tragic day has had an enormous impact on our society.

This month marked the 20th anniversary of 9/11. On this day, millions of people around the country recounted and reflected on their experiences that day, and remembered and honored the victims of the attacks – both those they had known, and those they did not get the chance to. In the Bellefonte community, we remember and honor Jonas Panik.

Panik grew up in the Centre County area, and was a 1993 graduate of Bellefonte Area High School. During high school, he participated in a number of athletic activities, including varsity football and track. He entered the United States Naval Academy in July of 1993, and was a dedicated and hardworking student there until he graduated in 1997, according to this Pentagon memorial.

After graduating from the Academy, Panik married and completed the Naval Intelligence Officer’s Basic Course in Virginia Beach, Virginia. He then moved around a number of times for his work, completing deployments in the Western Pacific and Arabian Gulf. According to this memorial, he was eventually “appointed as the Chief of Naval Operations Intelligence Plot. While there, he was selected to be a Flag Intelligence Briefer because of his superior skill and dedication.”

Throughout his four years of schooling and four more of service, Jonas received a number of awards, including, according to this pentagon memorial, “the Navy/Marine Corps Achievement Medal, the National Defense Medal, and the Armed Forces Expeditionary Medal.”

Jonas Panik was killed in the attack on the Pentagon on September 11. He was 26 years old. He is honored by the Bellefonte community for his dedication to serving his country. There are a number of online dedications to Panik, including pentagonmemorial, legacy.com, and basd.net.

Various memorials can also be found throughout Bellefonte including ones at Walker Township Park, Centre County Courthouse, Bellefonte Armory, and the Bellefonte Area Middle and High Schools. A new track that was installed along with renovations to Rogers Stadium at BAHS in 2019 is dedicated in part to Panik.