The newest addition to the Scream franchise 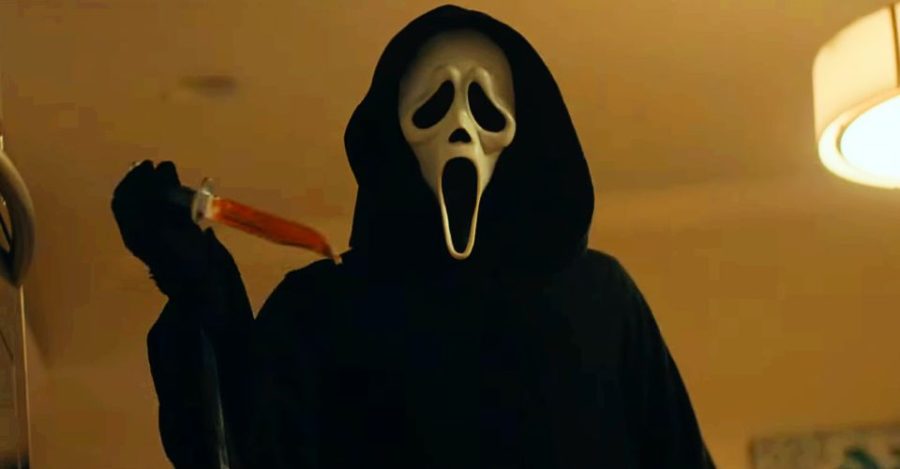 Recently, there have been new adaptations of older film classics. With movies and shows such as Halloween and “Cobra Kai,” people have been fed a taste of nostalgia. On January 14, there was another new edition of an old classic when the fifth movie in the horror franchise Scream released.

The movie includes stars from the other movies, along with some new ones. Courteney Cox, Neve Campbell, and David Arquette are all in the movie. They all have appeared in the first four, and this one is no different. New actors introduced into the franchise are Jenna Ortega, who plays Tara Carpenter, and Dylan Minnette, who plays Wes Hicks. Ortega is best known for being in the Disney sitcom Stuck in the Middle and a role in Season 2 of the Netflix hit You. Minnette is best known for playing the lead role in the Netflix series 13 Reasons Why. Melissa Barrera, who has made a name for herself in Mexico, will be in the movie. She has even started to do some American projects like Scream 5 and In The Heights.

The plot of the story is that a new Ghostface is in the town of Woodsboro, 25 years after the last one. He attacks Tara Carpenter, but she lives. Ghostface goes on a spree of attacks including attacking Tara’s older sister Sam, who is played by Melissa Barrera. Cox’s character Gale Weathers, Campbell’s character Sidney Prescott, and Arquette’s character Dewey Riley all find out about the attacks. The rest of the movie is these characters trying to track down Ghostface and stop him from ever terrorizing the town again.

There have been many mixed reviews over the movie. The movie has scored 77% on Rotten Tomatoes. Even the critics have had different reactions to the film. Critic Mark Kermode had a low rating for the movie.

“Remembering the thrill of the original, and just how brilliantly of its time it was, this is just alright.” Critic Matthew Taylor, also from Rotten Tomatoes, had a different opinion, as he gave the movie a 5/5.

“2022’s Scream is the best in the series since the original and, in the writer’s view, is one of the best slashers of the century so far,” he said.

As for the general public, there are also mixed reviews. The average rating on Google is 3/5. Don’t let that deceive you, because it seems as if there are more positive reviews than negative ones. Andrew Roman gave his thoughts in his review on……

“Met all expectations going into this film, acting was superb, plot was unexpected and almost jumped completely out of my seat several times throughout,” he said.

The movie has made a profit of $31.4 million as of the writing of this article as reported on The-numbers.com. The total worldwide box office earnings is up to $73.1 million. The movie has a runtime of 114 minutes and is only shown exclusively in theaters. This may not even be the last we see of Ghostface. There has been no confirmation, but because of the success of Scream 5, there is a chance we get a Scream 6.