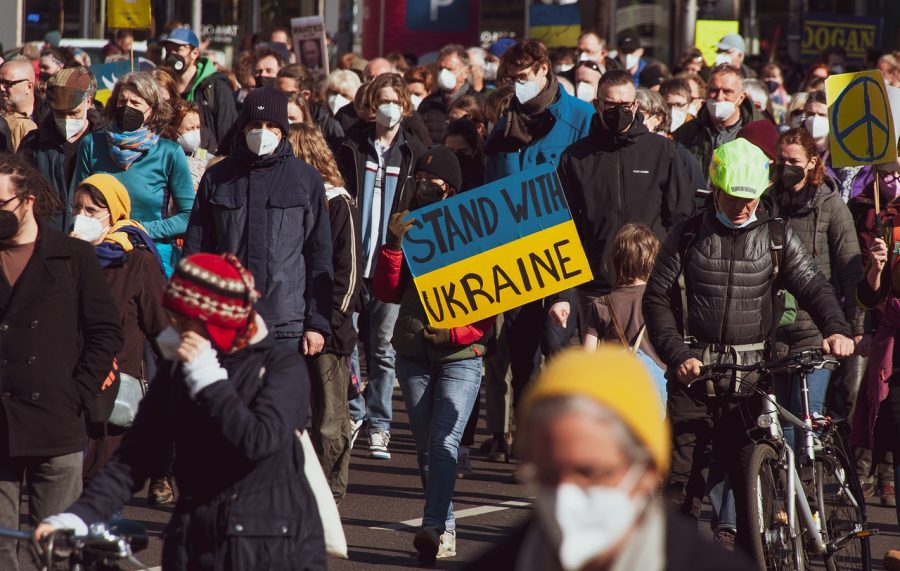 Russian missile strikes landed in major locations across Ukraine on February 14, beginning the climax of an international conflict that has been simmering under the surface for over 20 years. As ground troops followed in behind, the Ukrainian people began to unite under the banner of independence, fighting for their freedom as the world watches.

These motivations are also found in the actions Russia has taken so far throughout this proclaimed “war.” The February 24 capturing of Chernobyl, and the more severe bombing of Zaporizhzhia on March 4, Europe’s largest nuclear power plant were amongst the most threatening actions. A theoretical explosion within Zaporizhzhia could equate to the sheer blast power of “six Chernobyls,” Ukrainian president Volodymir Zelenskiy was quoted as saying.

The threat of nuclear war is not limited to the bombing of Zaporizhzhia, however. Russian President Vladimir Putin has put his nuclear forces on high alert, allowing all nuclear options to be on the table. This is likely a show of force rather than an actual threat, but the message is clear: Russia is all-in on taking Ukraine, no matter the consequences.

Complex global politics have also made other countries unable to step in to assist Ukraine directly. Ukraine is not a part of NATO, the North Atlantic Treaty Organization, despite having attempted to join since around 2014. This is due to Russian territorial disputes in the country, alongside rejection from Germany and France. These disputes automatically disqualify Ukraine from becoming a member, and severely inhibits the level of involvement other European countries, or any country for that matter, can have with this particular affair.

Even without massive global support, Ukraine is not a lost cause. Already, Russian assaults have been depicted with several flaws. Russian soldiers had even allegedly been misinformed about the details of the mission into Ukrainian borders. A text conversation recovered from the phone of a deceased Russian soldier depicted the dissent beginning to brew within Russian lines.

“I’m scared, we’re hitting everyone, even civilians. We had been told that people would welcome us here but they jump under our vehicles, not letting us pass. They call us fascists. Mom, it’s so hard,” reported the Ukrainian Security Service.

While the war is fought on the Ukrainian front, protests have sprung up across Europe, and even into Russia. Russian officials now have two wars to fight, the one in Ukraine, and the one within their own borders, as their people begin to rise up against them.